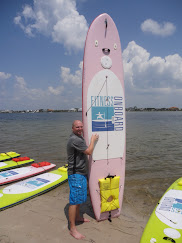 Spending a week along the Gulf Islands in Alabama and Florida, I was watching for a chance to do something I've wanted to try for a longtime now: standup paddle boarding (or SUP). Yesterday, I found Onboard Fitness near Fort Pickens and set up a time for this morning.

I spent a lot time on the Internet learning about SUP and how to do it. Surely, that was enough for me to be a seasoned paddler, right?

When I arrived at the site, I surveyed the water and noticed a strong wind heading west-to-east. Being an experienced kayaker, I knew to paddle upstream first, because returning downstream when you're fatigued is much easier. I guessed the same strategy applied here. Once I checked in and got my board, the attendant told me the same thing. He suggested I start into the wind because the return would be much easier. Awesome! I had used previously learned content from another discipline and applied it here. I was well on my way.

The attendant pushed the board into the water for me and explained a few last minute details like how to find the center of the board. "Blah, blah, blah," I thought. "I learned all this on the Internet. Just let me get on the board." The attendant adjusted the paddle to my height, which I wouldn't have known how to do. "That wasn't on the Internet."

Then the time came, I got ready to step on the board and realized I had no idea how to get on without immediately falling off. The attendant held the board in place while I climbed on. I guess I needed him a little bit. Later I watched a more experienced person get on her board and learned the proper technique for launching a board yourself. Oh yeah, and that more experienced paddler was a 12 year old girl.

I paddled around the bay learning different skills as I glided across the water. Since you can only paddle one side at a time, I was inefficiently going in a zigzag line. After about 20 minutes of this, I realized if you lean your weight to one side while paddling, you can keep a relatively strait path.

My feet were getting extremely sore. I realized I was too tense trying to keep my balance with my feet. I knew from surfing, you need to relax your feet and balance with your core. So, I tried that.

Again, I knew from kayaking that you can turn tighter if you paddle backwards. But, it took a turn almost running me into a buoy before I remembered that detail.

I had the board for 2 hours, but returned it about 30 minutes early because my feet were cramping, I was sweating from the sun beating down on me, and I was just finished.

So, what did I learn about #flipclass from this adventure?

3) Previously learned content from another discipline was very helpful.

4) I knew not to paddle with the wind, but the attendant advised me anyway. Had I not known and he not said, I most likely would have take the path of least resistance, literally, and paddled too far out of my ability to return safely. Some things just need to be said to avoid almost certain failure.

5) I returned early because I was too fatigued to continue and I was satisfied with my outing. How many times has a student turned in incomplete work and we thought the to just be lazy or apathetic? With a flipped class, I can see the student is fatigued and satisfied at the moment what he or she completed.

6) Once I returned, walking was difficult because of the tenseness in my feet. What would happen if I had to go paddleboard another waterway for an hour immediately after? I would certain not succeed. How many times are kids sent home with mentally taxing homework and once they finish, they have to start on another mentally taxing assignment?

I gained a lot of knowledge in the short time I was on the board. I was given the freedom,with minimal instruction, to just get on the board and practice. I remember a surfing lesson I took several years ago that spent nearly an hour of on the beach instruction telling me how to surf. Once I got in the water, that instruction was useless. And, each time I fell, I paddled to shore and the instructor would tell me what I did wrong. I didn't truly learn how to surf until I rented a board and just tried over and over again until I found success.

If I was graded on my SUP experience, I probably would have earned a C or B-. Good thing this was only practice.

As I was leaving the SUP rental dock, the attendant told me, "We also have onboard yoga every morning!" Unless this is going to be on the state standardized test, I have no interest in advancing my skills that much.

Posted with Blogsy
Posted by Troy Cockrum at 11:04 AM